In Memory of Nicolas Peloponissios 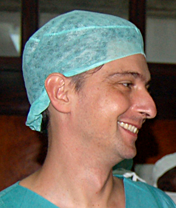 Nicolas Peloponissios, a 44 years old surgeon from Lausanne, died on September 7th, 2008 from the injuries he suffered during an airplaine crash in Windhoek, Namibia. Due to an engine failure only minutes after takeoff, the small aircraft had to make an emergency landing in the streets of the city. Three other passengers – amongst them Nicolas’ partner, an anesthesiologist from Zurich – and the pilot survived the accident. Nicolas Peloponissios had arrived in Africa only one day before and was on a holiday trip. However, he had travelled the continent several times for humanitarian projects.
Nicolas Peloponissios worked for hospitals in the cantons of Waadt and Fribourg, but he was very much involved in humanitarian operations as well and was about to establish the Fondation Anthropos. He layed the base for a foundation that would provide support for individuals and communities, leading to a more acceptable life.

To continue his work, his friends created the Fondation Anthropos shortly after his death to let the spirit of altruism live on that motivated Nicolas.